At last spring has well and truly arrived and whilst it was not a hard winter it’s always a joy to know that by the time we get to April better weather is ahead (we hope)!
I’ve invested in some new shrubs: Physocarpus opulifolius ‘Tiny Wine’, a deciduous shrub which will grow to about 1.5 metres and has attractive bronze/purple foliage with clusters of pink tinged white flowers in summer and Hydrangea paniculata ‘Living Touch of Pink’.
Unlike other paniculatas it should only reach 60cm in height and, as its name suggests, its conical white flowers will be flushed with pink as they age. I’ve also planted another Pieris ‘Forest Flame’. Of all the Pieris varieties this one is my favourite. It’s well named as its new spring foliage is brilliant red. Sadly late frosts can turn these new shoots brown but thankfully it will bounce back. It produces white flowers which resemble lily-of-the-valley blooms that hang in bunches like grapes.
Recently Trevor Hodson invited me to go and have a look at what he and the team of station adopters have been doing at Syston railway station.
They have planted two trees – a magnolia, kindly donated by Goscote Nurseries, and a crab apple in memory of Derek Cox and Maurice Bent, who both spent many hours planting, pruning and weeding at the station.

Barrier baskets on the platform planted up with colourful primulas and tete-a-tete daffodils and a good selection of shrubs, trees and clumps of daffodils planted around the car park make the station attractive for travellers. The photo at the top of the page shows a Photinia fraseri ‘Pink Marble’ in one of the planters near the platform steps. This is another shrub which is at its best in the spring with its bright pink/red new growth, as showy as any flower.
In Rearsby there has been a large flock of finches, predominantly chaffinches and their cousins, Bramblings, which have taken advantage of the seeds left over from a crop of last year’s sunflowers.

I was aware of reports of large numbers of Bramblings migrating here this winter from Scandinavia and northern Europe and, as I had never seen a Brambling before, was delighted to see such a large flock locally. A friend of mine took the photo shown here. Staying on the topic of finches I’ve been very fortunate to have several chaffinches take up residence in the garden and more goldfinches than ever before have been visiting the feeders.
However, I was totally astonished to see at the height of storm Eunice, when I didn’t expect to see any birds flying about in the garden, more than usual coming in to feed, including three pairs of Greenfinches.
Greenfinches used to be plentiful but have declined drastically over recent years and are on the RSPB’s red list.
They have been especially affected by a parasitic disease, so it’s essential bird feeders and tables and kept clean. Since that day I haven’t seen the six of them altogether again but I can hear them calling, so it’s good to know they’re still in the vicinity. Hopefully they’ve now paired up and are busy building nests. 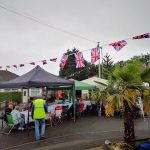 One Leaflet Creates a Community 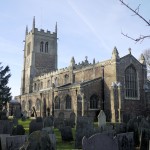